The Basilica of Lechaea was dedicated to the bishop of Athens Leonidis, martyred with seven women, around the middle of the 3rd century AD, with drowning in the sea of the region. It came to light after the excavations carried out at the expense of the Archaeological Society by archaeologist D. Pallas in the 1950s and 1960s.

Basilica, the most important paleochristian monument in the Peloponnese, occupies a total area of 11,000 m2. on the west arm of the Ancient Harbor of Lechaio, one of the two harbors that Corinth had in ancient and Byzantine times. The other was Kenchreas, in the Saronic Gulf.

It is the longest basilica in Greece (about 180m). The temple belongs to the three-aisled basilica with a five-aisled transverse aisle and dome, a narthex, a double patio, a tripartite baptistery in the northwest and a large number of forts. Staircases to the west led to the palace of the temple.

The monument is believed to have been founded in the second half of the 5th century AD, admitted and plated until the first third of the 6th century. In general, different phases and alterations or additions are found in different parts of the temple. Perhaps the use of the basilica ceased in the 7th century after its collapse from an earthquake. Subsequent Byzantine temples were built inside the arch of the sanctuary. 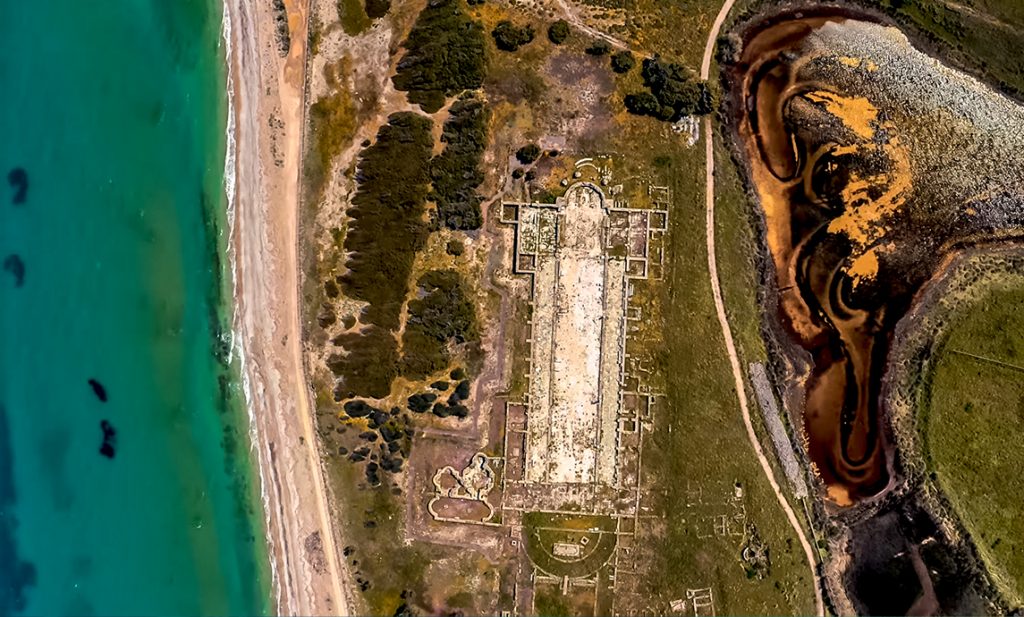 In the Baptistery, it is assumed that the western space was intended for the formal ceremonial before baptism and the quadruple that it was the locker room. In the octagonal space, carrying two swimming pools, probably for adults and children, the baptism (lighting) was done. In a later period, which would not have lasted long since the destruction of the basilica, and the space of the lighting was transformed into a temple.

To the south and west of the temple, inside the atrium, extensive residential remains have been discovered that were built, mainly after the destruction of the basilica. There were places of gathering, facilities, tanks etc. and it remains the subject of research when they stopped being used. Significant indications for the continued use of space after the destruction of the basilica (graveyards) were also found in graves outside the basilica. In the southwest of the basilica an earlier chronologically basilica has been excavated, with different chronological phases in its use.